The exciting growth of payments in the US Gaming Industry

The US gaming industry continues to grow exponentially, making it a highly exciting place to be for those within it. Changes in regulation have allowed more states to create a safe and responsible framework for both gaming operators and players, resulting in phenomenal growth over the last few years. According to the American Gaming Association, the US saw an uptick in gaming in 2021 with some states, like New Jersey, hitting over $1 billion in revenue per quarter throughout 2021.

At PXP Financial, we’ve been operating in the US since 2013 and this has given us a lot of experience and time to understand the industry. It has also allowed first-hand access to data around the growth of payments across all 17 US states we are currently operate in. This includes data for payment preferences, conversion rates, chargebacks and more. In this blog, we will share some of that data, as well as our analysis from our team of experts.

The best place to start is to look at the gaming industry per US state and see how it has grown per quarter since our services went live. Looking at the overall data, each state matured overtime with noticeable trends. The majority of states would begin by following a specific pattern, starting with ‘Low Penetration’ (little to no operations taking place yet) initially and maturing to a ‘High Competition’ (lots of competitors, making for slower growth) state overtime

For example, West Virginia, Pennsylvania and New Jersey each saw a consistent increase in maturity every quarter, moving up through the different stages every year.

From our analysis of the patterns, this increase in maturity has come from the new experience customers have had as regulations ease up and allow for more freedom in the gaming industry. This, combined with changes to payment solutions, new platforms and improved User Interface (UI) and User Experience (UX) has made gaming more accessible and easier to play for the end-user, with any new regulations and technology that might initially cause friction being weened out after a few weeks and months.

Based on the patterns we have seen, we have been able to group each state into different stages of maturity:

When looking at the data for conversion rates, we can see a direct correlation to market maturity, which was expected. As the market penetration of each state grew per quarter, so did the percentage of successful conversions, with different rates per state. From our analysis, there are several factors involved that cause this. For example, issuing banks in states where gaming was previously forbidden are now needing to modify their policies to accommodate these new transactions, and this is happening at different rates. There may also be both technical and functional issues in the transaction value chain that gaming platforms and payment providers need to overcome. These include initial teething issues, issuing banks whitelisting, error handling, messaging on cashier for declines, fallback options (or lack thereof) and specific preferences per state to understand.

The changes we will need to see in these states to improve conversion rates are banks approving gaming transactions more consistently, gaming operators promoting more convenient payment options to their players, risk rules that have been optimised according to the markets and an understanding from players around their preferred payment option. All of these will eventually help the operators achieve better conversion rates.

When analysing the ATV rates across the US, the majority of states average between $80 and $160 per transaction. There are several underlying factors we have identified for this variety, primarily socio-economic factors, cultural affinity to gaming, the minimum transaction value set-up with gaming operators and the amount of promotion these operators put forth. All of these contribute in some way to the amount of money players deposit.

With current data, chargeback rates are low when compared to gaming operators in Europe, even with some of the longest running states like New Jersey and West Virginia which have rates of around 0.2%. There are multiple factors at play for this, such as stricter regulations in the industry, limitations on spend to promote responsible gaming, fraud checks and better Know Your Customer (KYC) checks.

The last piece of significant data to cover from the US gaming industry are the preferences around payment methods. Across all 17 states, 14 total payment methods were recorded, with 10 states utilising at least 13 of them and New Jersey being the only state to accept all 14 (with that additional method being American Express).

Unsurprisingly, Visa was the most dominant payment method in every state. The next three highest payment methods (Mastercard, PayWithMyBank and PayPal) fluctuated in use rate per state. Across all the states, the biggest takeaway is that the more mature the states are, the more payment methods have been made available.

Overall, from this data we can see that the gaming market penetration in the US has risen per quarter throughout 2021 and is expected to continue rising throughout 2022 as each state matures. With state maturity comes more consistent conversion rates and the number of payment methods available increases. For states in the ‘Low Penetration’ group, the market penetration increases rapidly but as higher maturity is reached, growth slows down and stabilises. This could take years to reach but eventually each state reaches a higher level of maturity, and we expect we will continue to see this trend in every state going forward, as regulations change and allow for more freedom in this exciting industry.

Take a closer look at our data in the infographic by clicking on the image below: 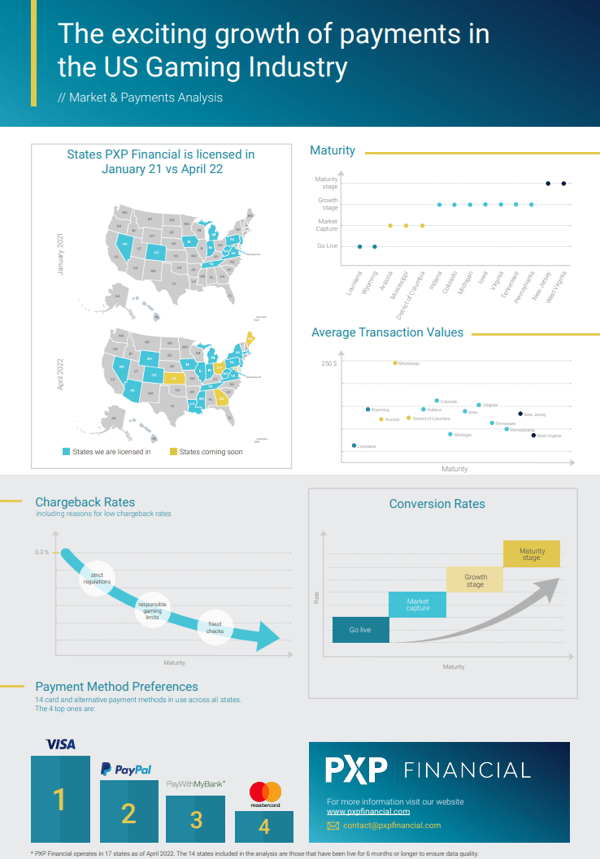